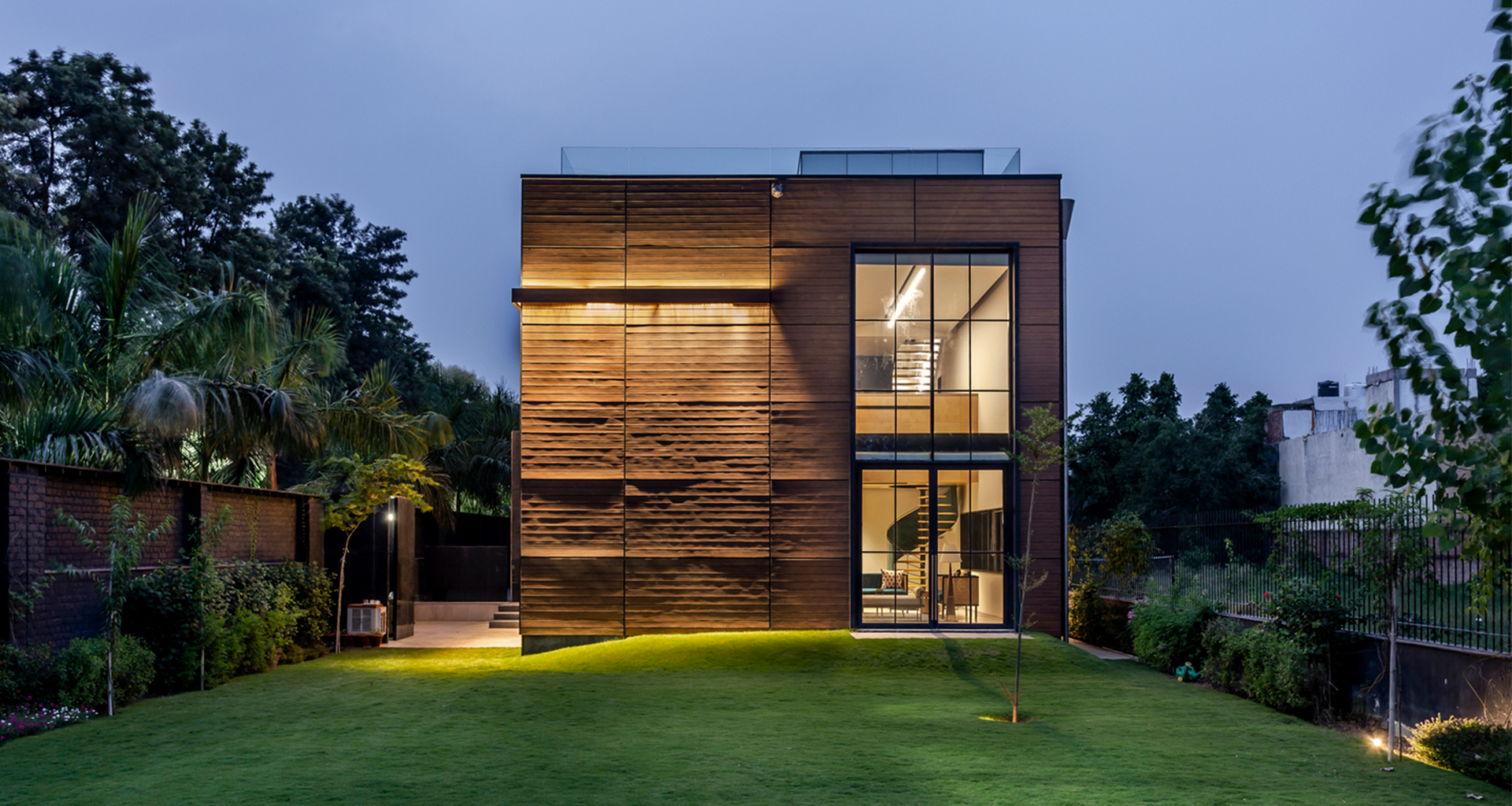 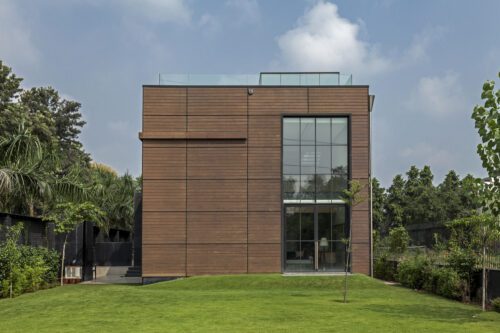 Within the residential realm of Palm Avenue, Vasant Kunj, the project reflects an unconventional feel of other-worldliness. Standing disparate with its clean lines and minimalistic exteriors, the property is symbolic of the evolution that its owners and creators underwent during its three-year completion/construction period. Home to a family of five, across three generations, the project presented an opportunity to its residents to live in their own diverse ways yet unified in spirit. 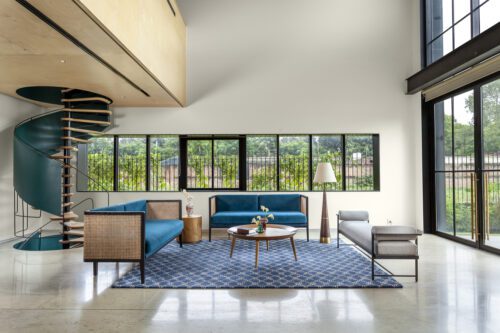 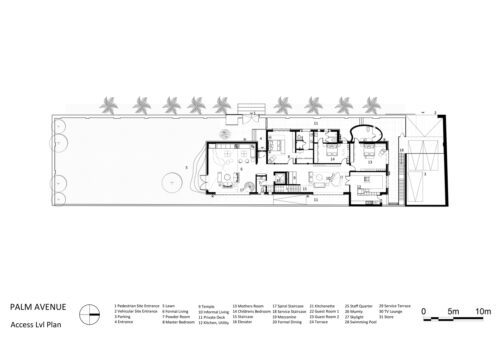 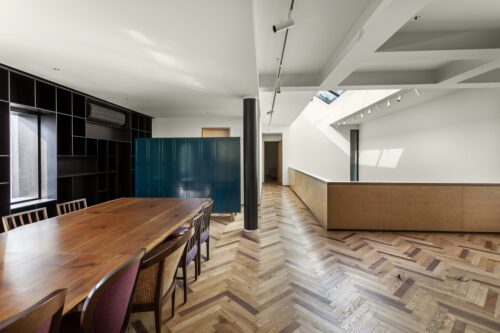 With the land as the centrepiece, the discourse of the project unfolds prudently, with the design adapting to the space and its demands. Much like the Villa Petit, designed by Le Corbusier, the studio positions all the plans in sync with the space at hand. The pillars of the project are natural light, clean air, an open floor plan and luxurious interiors synonymous to the disposition of the residents. Divorced from the denotation of pretentious, the blueprints focused on building a house with a strong foundation deep-rooted in the rich history of the family, capable of catering to the present needs and offers plenty of future opportunities. 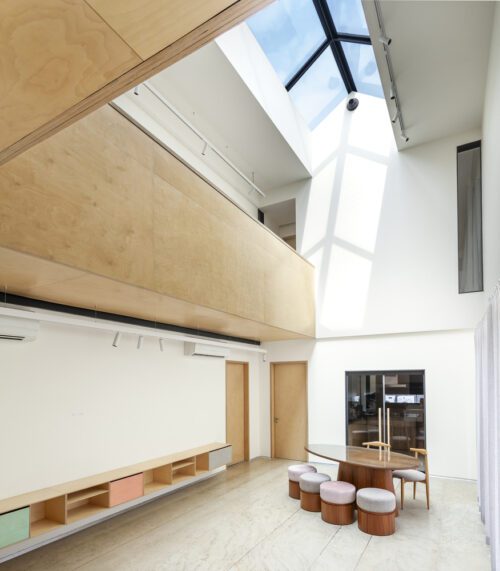 “When you are consciously aware of the liberty you have, it allows you to deconstruct your own creation.”

This thought led to the decision of creating a space that is progressive, timeless and still relevant twenty years later. Wrapped in meticulous timber grids, the exteriors are carefully planned to reflect the gradual ageing process one sees in nature. Dipping into the same nature-centric focus, the landscape is bohemian and vernacular in character. Lemongrass and seasonal flowers mark the boundary of the house and daily-use ingredients growing in plentiful amounts serve as gentle reminders that the entire eco-scape is composed of a value system in its entirety. 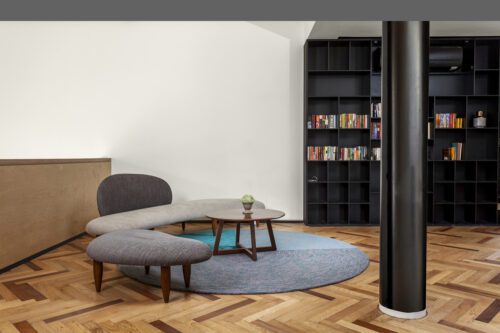 As one enters the house, there is a sense of home. Like most families, it doesn’t reveal all but gives you a feeling of being a welcomed insider rather than a guest. The ceiling upon entry is kept deliberately low, with a sudden boom of height as one walks through the doorway, escalating from 7 feet to 22 feet of height in an instant. The visible structures stress order and provide a clean space with clear narratives that are real, minimal and honest to its residents. 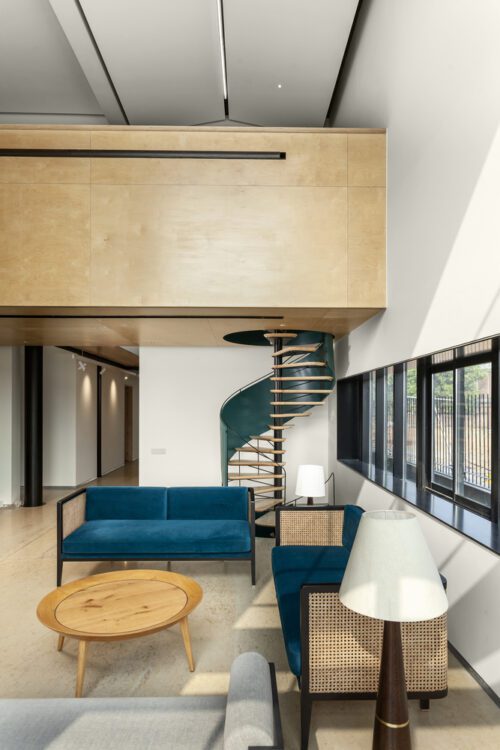 The house features two distinct spaces: private and public, which deem fit when overlapped. Entered through a punctured-like sort of short transition from the family space, and into the common room. The formal living area blends in with the family recreation space, emitting a sense of inclusivity. The formal living room connects to the formal dining area through a brightly-coloured, animated spiral staircase with metal wrapping, which is inspired by the renowned architect of the mainstream modernist movement Pierre Chareau’s dynamic and delicate sense of design 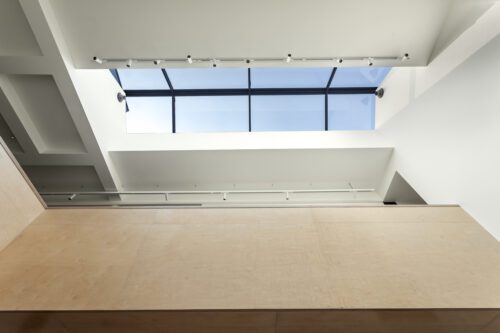 The formal dining room houses a large table that can accommodate up to 40 people, with a striking minibar and parquet flooring in three colours, making it optimal for entertainment and quintessentially minimal. This space overlooks the front lawn, which has been completed with customized seating and toddler play arenas that are set against black exterior walls to highlight the green. The lush green garden is also a source of calm and serene natural light that diffuses through the 6-metre-tall contemporary styled glass facade. Right under the formal living room is the basement, concealed from view to highlight its private function. Equipped with a home theatre, giant cellar and replete with storage, it is the perfect extension acoustically treated for loud parties, disconnected from the rest of the house and accessed through an elevator. 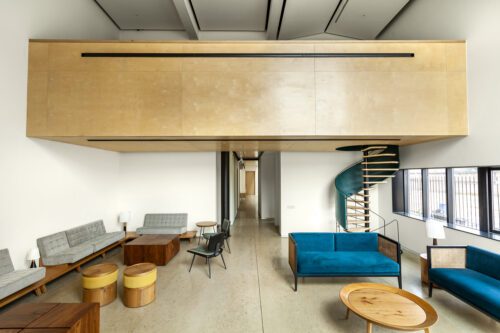 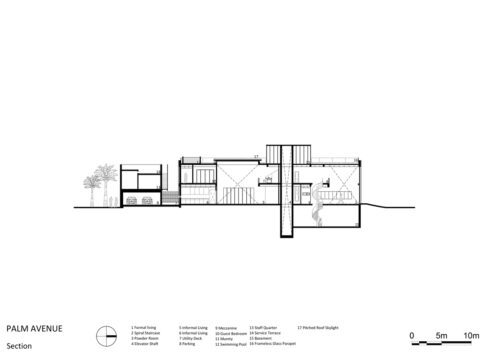 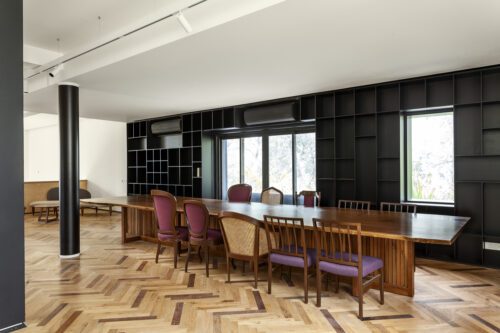 Each bedroom has been carefully planned and executed to suit each family member’s requirements while following the same overarching theme of simplicity. While the kids’ room has a colourful floor with textiles in geometric patterns and bright colours, the adult rooms are more spacious and classier, with oversized beds on giant platforms, resembling a traditional Indian palang. While most people think of houses as hotels, the studio has a different outlook. The house is programmed in a way to allow for flexible partitions and systems, which can be molded to increase or decrease space as needed in the future. The bare walls serve as an opportunity for the family members to start afresh and etch their experiences as they move along. With a clear concept of drawing on the natural energy and playing with backward layering, the studio had to stay away from over-styling the space. Keeping light at the crux, the studio has focused on the various aspects surrounding it, including diffusion, patterns and shadows. The mumty on top of the staircase is made of mirrored glass and disseminates light everywhere, adding to the airy feel of the house. Each element resonates opulence and is an anecdotal response to its residents such as the floor, which is hard quartz with brass inlay from MP, and the open-riser timber staircase, which leads to a straight flight up to the next floor, giving a crisp and fuss-free look to the room. The house has a pitched roof, which is where the real release of space comes into play. The apex skylight is covered during the summer months and opened to abundant natural light in the winters for the family to enjoy. The rooftop also houses a small pool.

The studio wanted to elaborate on the idea of the home being a space for people, which is why the conscious decision was made to keep the car park away. The house is sans a porch so that no cars are seen, ever. Additionally, the service footprint in the house has been minimized and is safe for children providing them unfettered movement. The studio has worked consistently towards reducing wasteful energy consumption at every level, be it material, or intellectual so as to never overstate something that seems incomplete or complex. In doing so, the essential elements have become the creative process and the end product is satisfactory across all sensory levels. 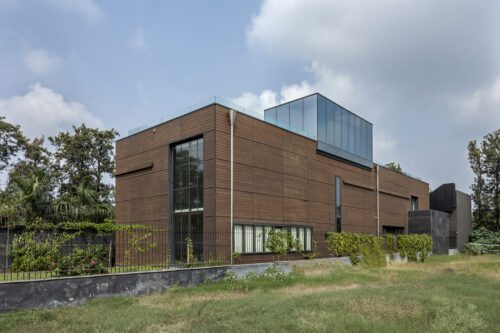