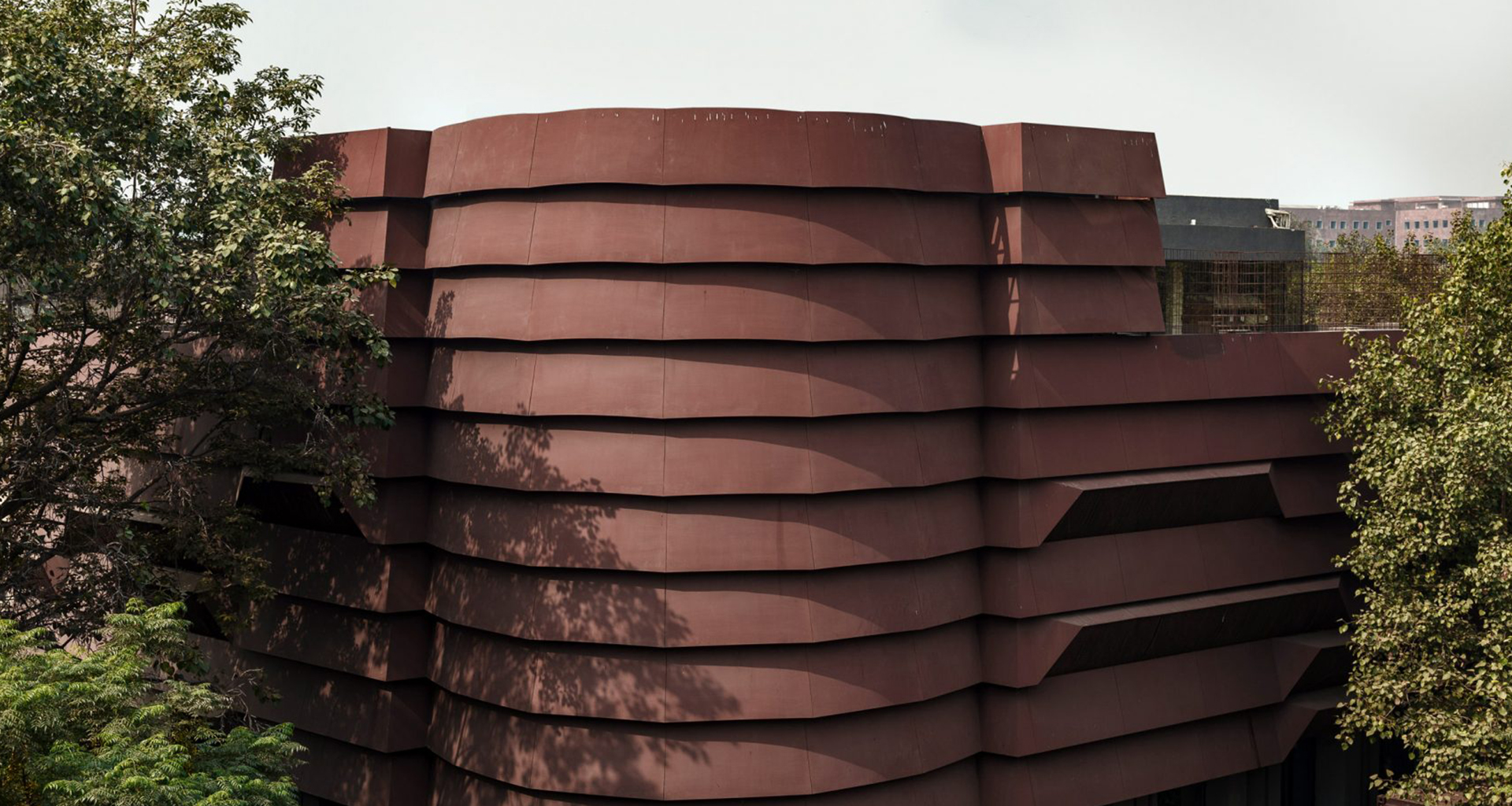 Sign of the Times: Dezeen on AD’s Design for Rug Republic HQ 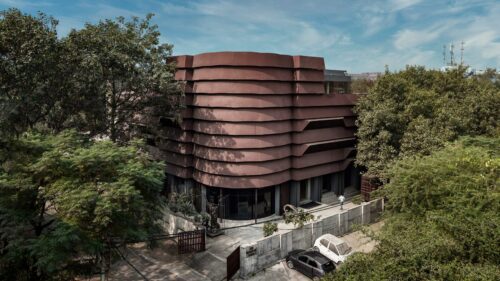 The building has a rigid exterior, with its bands of Corten-steel cladding almost entirely enclosing the block.

Described by the studio as a “post-industrial aesthetic”, the building’s appearance was also designed to intrigue visitor’s to the headquarters. 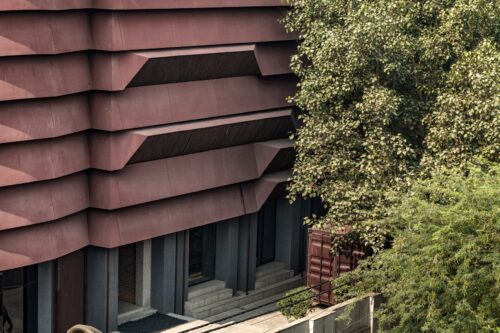 “Instead of hiding under a veil of glass and granite, the design aims to make a post-industrial statement that would intrigue the visitor,” he told Dezeen.

“The building is a reflection of the current time and creates a strong impression with the onlooker.” 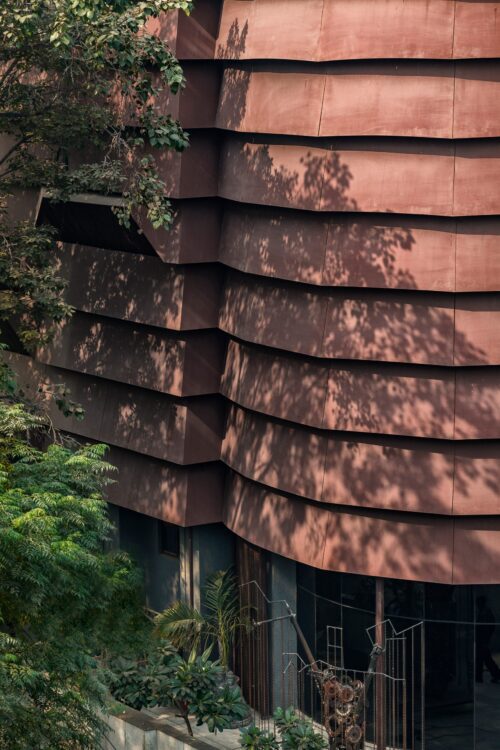 In places, the cladding is broken by aperture-style openings that are covered in steel chains that serve as shade screens and prevent monkeys from entering.

On its ground level, the steel shell is interrupted by glass windows alongside the building’s entrance. 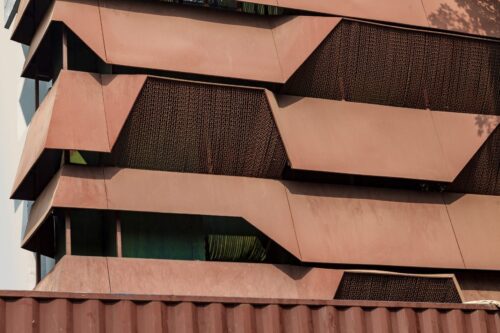 Inside, the building was renovated to create a warehouse-like aesthetic.

“It’s fascinating to take something forgotten and to give it new life; this is the century of recuperation,” Bhatt said.

“There is no space, no water, and no forests anymore for the continuous production of new things. So it makes sense to take something old and make it special.” 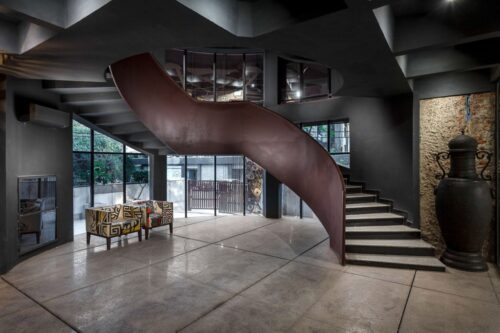 The interior has a minimal palette, employing raw materials and a simplistic, tonal colour scheme to create a neutral backdrop for the company’s rugs and furniture. 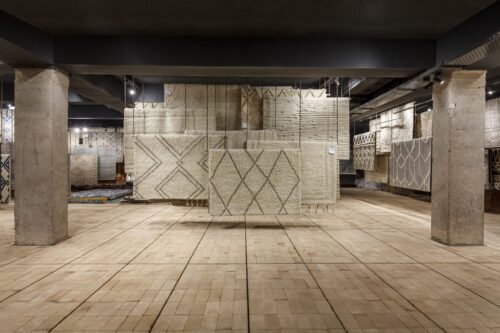 Walls were painted black and combined with fire brick flooring and rebar cages to create an unfinished, industrial look.

A helical, weathered-steel staircase occupies the corner of the building and was designed to be a counterpoint to the building’s mostly linear layout. 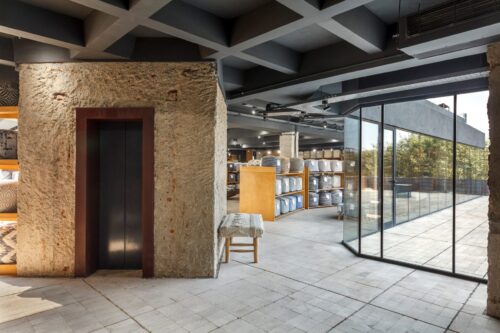 A small terrace at the top of the building provides a bright open air space to admire the surrounding views.

On the ground floor, several shipping containers with chipboard interiors were designed to be used for impromptu meetings and employee breaks. 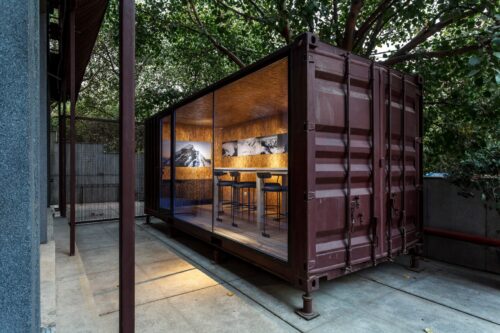 Architecture Discipline is an architecture studio founded by Akshat Bhatt in 2007. The studio creates work across many disciplines including retail, residential and large-scale public works.

Other New Delhi projects include a light-filled four-storey home with a windowless facade and the interior of Bodice’s flagship store.

Photography is by Jeetin Sharma.