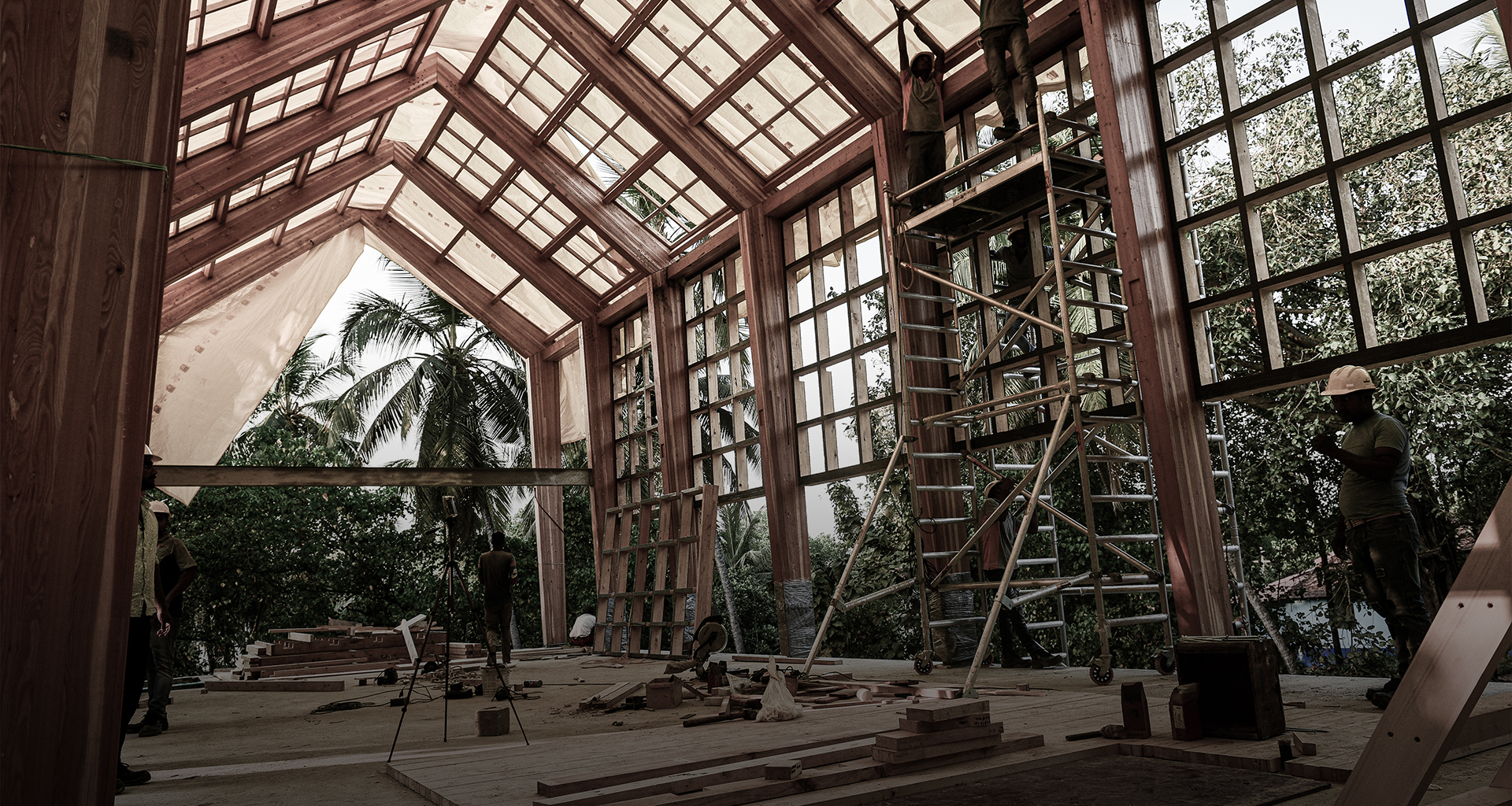 Why the Key to Sustainable Architecture Is Responsible Design

Architects Akshat Bhatt and Ajith Andagere speak to AD about what it means to build sustainably in modern-day India.

In North Goa’s Vagator, where sea wind, humidity and the four-month monsoon make for challenging companions, an upcoming residential project is using a rare material for its structure. The roughly 6,000 square-foot residence uses raw structural timber and Douglas fir imported from Canada. With the timber laminated and processed in Manesar near Delhi and put together in Goa, this claims to be the country’s first residence built using glulam—glued laminated wood that stores atmospheric carbon dioxide instead of emitting it.

In this post-pandemic world, during which residents from big cities have bought properties, cleared out open fields and built dream second homes in Goa at the expense of the very greenery that attracted them to the state, Architecture Discipline’s use of mass timber is as unusual as surprising. While there is no smart controlled farming in India, reason why this material can’t be sourced in India, the use of timber in a region with climate that’s the exact opposite of Canada, calls for a fairly obvious “why” question. “It has a few basic tenets,” says Akshat Bhatt, founder and principal architect of the Delhi-based firm. “You don’t need to create warmth, or a sense of space by cladding steel or concrete. The fundamental structure can become finished instantly and error can become the detail. It’s still cheaper than a conventional house.”

Bhatt talks about changing patterns of consumption and the requirements for comfort with lifestyles. Today, all homes have air-conditioning, creating “islands—white hot, radiating boxes, taking heat from the building and putting it out.”

“What I see happening with local material is they are not intelligently farmed and because they have a certain aesthetic or feel, or terroir, we tend to work with them in a manner that creates waste. If you take sandstone from Agra to Bengaluru or wherever, start chiselling it and wasting a percentage, then you are destroying the position you started with. Therein lies the saying: Conventional methods of construction are resistant to change because people have found ways to make them efficient and inexpensive for themselves,” he explains.

Ajith Andagere, who runs an eponymous architectural firm in Bengaluru, says that about three-four decades ago, if you travelled the country, you would see that a sloped roof signifies a rainfall area; a steep sloped roof would mean snowfall or heavy rain, while a marginal slope would be central India. Thick walls—stone or mud—would be in dry and arid regions. Today, Kashmir to Ratnagiri to Patna to Gangtok, everything looks the same, he bemoans.

“In villages, you don’t need air-conditioning but need mechanical support to cool down buildings. We are creating a problem and trying to solve it. Without fan or AC, it’s impossible to stay anywhere,” he says over the phone from somewhere near the Jim Corbett National Park in Uttarakhand, where he is building a wellness spa resort. Some of his sense of melancholy comes from where he is at the moment, overlooking the hills, with crickets and a breeze making pursing noises in the background and into his phone.

Sustainable development, a buzzword…a feel-good concept—one of those phrases that sounds hip like sunflower seeds and vegan cheese, is something that allows people to meet their own needs without comprising the ability of future generations to meet theirs. Bhatt defines it as something that reduces consumption—material, land, air, water, and reduces waste production as part of a process for the life cycle of a building. While the building is up and about or when people are using it, it should produce its own energy, treat its own waste. This includes reducing manufacture, sourcing locally so as not to consume unnecessary fossil fuel through transport, and address recyclability by taking a material and reprocessing it. “The second aspect is building components that are modular,” adds Bhatt. “Steel beams will last forever if maintained. Once you get into the deeper matrix of sustainable material, you will realize it’s not as easy as saying I will use mud plaster. You can’t use mud plaster at an airport, for example.”

Andagere believes that an RCC flat roof is not the only game in town—there are other options like a Madras terrace roof, kadappa (black limestone), broken bricks and limes, all of which are good enough to do a hundred floors. These materials maintain thermal comfort of the indoor space and don’t need to heat or cool the place. Further benefits come from solar and wind energy, cross ventilation, and giving windows their rightful place.

He painted the exposed brick wall with lime wash, though lime is more expensive than cement. The studio has a sloped roof and has coconut timber for rafters because it is economical and will last. He used second-hand Mangalore tiles and handmade country tiles that’s four degrees cooler than an RCC roof. The house runs on solar power with a 20,000-litre tank for roof water. With the grey water, he is growing bananas, water spinach and some flowers. “From a public point of view, the cost will be more in some cases,” adds Andagere. “Overall development has to happen from the industry and then the cost will come down. Ten years ago, solar panels cost more than three times as they do now. Karnataka made it mandatory for every house to have solar water heater and the cost has come down.”

Bhatt does not believe that sustainable needs to be more expensive. Conscious design is more expensive because it takes more time and effort to create that bespoke detail. “I have seen white paper studies that say basic Italian marble is more energy efficient than cheaper installed ones and have over a 20-year life cycle.”

He says the biggest myth in sustainable development is green energy, using renewables. “There are enough studies and talks that say solar panels and windmills don’t work because the payback, energy generation and life cycle is too low.”

What architecture has to strive for, Bhatt adds, is to be responsible, to create easily serviceable, flexible spaces that can lend themselves to multiple uses. “If you are sitting in a space and feel there is no need to move from it ever (not sitting but occupying) that’s one really great step,” says Bhatt.

He talks about his own office and home, neither of which he wants to leave, but both of which he is happy to enter when he leaves one for the other. “If most of your needs are met in that space, you will not want to consume more. Space is more about creating that ability in your mind that’s engaging you at every corner,” says Bhatt.