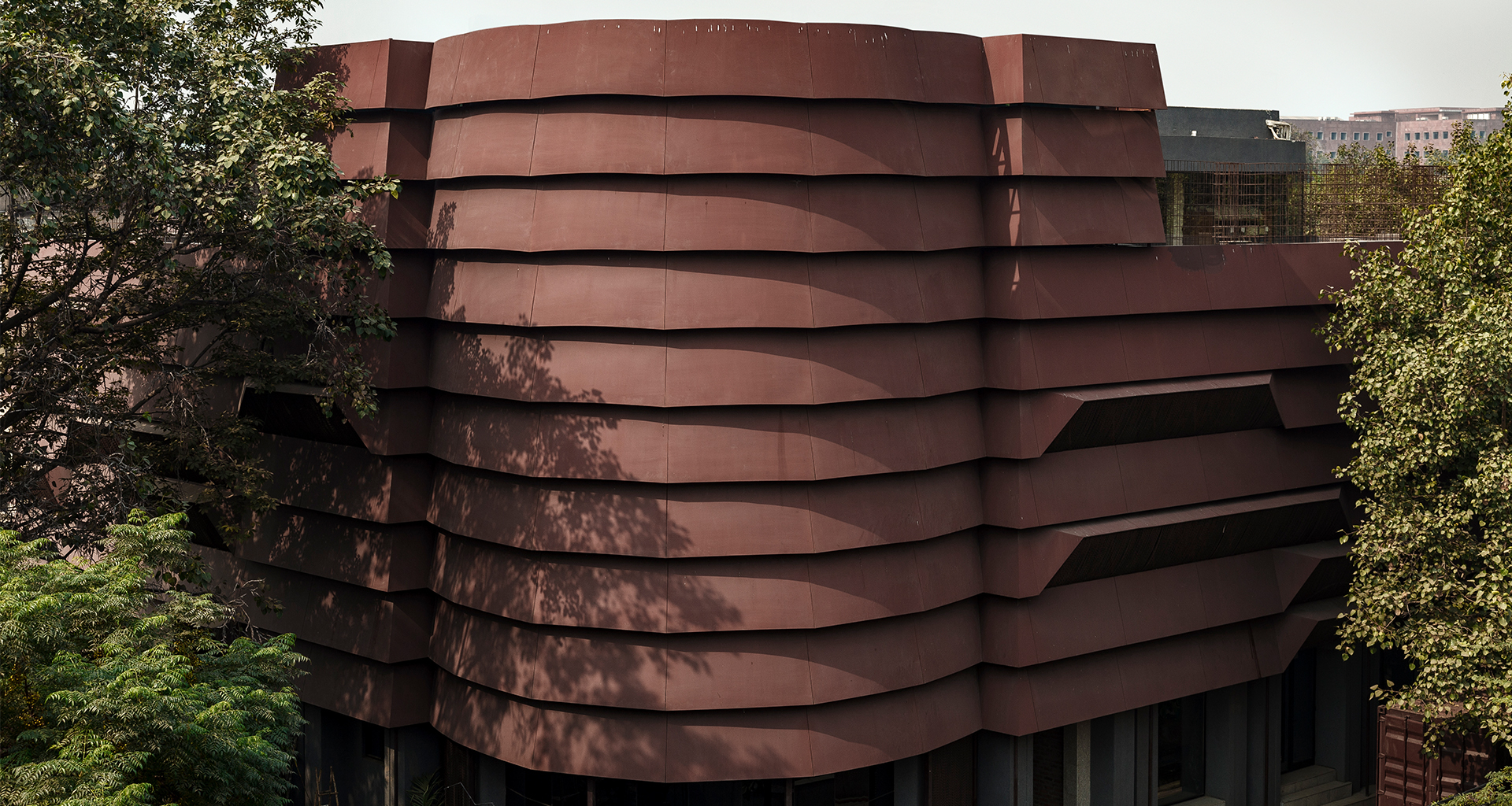 At the Rug Republic Headquarters, New Delhi, an old, dilapidated structure is given a lease of new life with minimal interventions. The building, located in the industrial hub of Okhla, is enveloped in a skin of Corten steel that protects it from its acrid context giving rise to an inward-looking structure. The design reuses the warehouse by undoing ad-hoc alterations in the building’s layout and creating open planned spaces. A bare shell with a non-intrusive backdrop works to showcase the displayed products. Bare black interiors, rebar cage and fired brick flooring offer an unfinished aesthetic to the space and allow
for removal for future adaptations. By reusing the existing structure and making restrained alterations to the spaces, the design prioritises sustainability and flexibility.

‘It’s fascinating to take something forgotten and to give it new life: This is the century of
recuperation. There is no space, no forests, no water anymore for continuous production of new
things. So, take something old and make it special.’

Emerging from this thought, the design of the Rug Republic headquarters in Okhla, in the heart
of New Delhi is a reaction to its industrial setting: an indictment of what we have brought our cities
to. The brief presented by the client was to make the existing dilapidated building usable again,
within a limited budget and with minimal interventions. Hence, a great emphasis has been placed
on reclaiming the usable spaces, by undoing ad-hoc alterations in the building’s spatial layout and
removing layers of the flooring that was done by its previous occupants.

The design, a weeping transformer, is a reinterpretation of an expression of warehouses that
emerges from the architect’s understanding of the physical context and the challenges it posed.
By equating Okhla to a war zone, a metal shell has been enveloped around the structure to protect
the interiors from the hostile and acrid environment. An inward-looking building, therefore, finds
its justification in the site’s industrial skyline that offers nothing of visual interest at eye level. Furthermore, acrid air quality and ruckus created by the monkeys in the neighborhood demanded
a deviation from the conventional glass architecture and prevented large openings on the facade.

Within the building, the movement is centered around a helical staircase, thereby a curved
aperture creates a sharp contrast against the rectilinear ceiling and establishes a visual
connection between all floors. The curved form is further reflected on the exterior facade and helps draw the eye towards it. There is a well-defined hierarchy in the spatial organization. Frequently used spaces such as offices and temporary exhibitions are housed on the ground floor, while permanent exhibitions for
the company’s diverse products and private office cubicles are accommodated on the upper levels. Two container areas have been designed as a spillover space during the work breaks and a small terrace on the top provides views of the distant greens.

Since the building has been designed for one of the largest international exporters of rugs and soft furniture, the idea was to create a bare shell that generates a non-intrusive backdrop to celebrate their exquisite work. This has been enabled using bare black interiors, rebar cage and other inexpensive interventions for the exhibition that offer unfinished aesthetics to the space.Furthermore, the use of temporary interventions adds to a degree of flexibility to the internal layout.The floors are lined using fire bricks to allow ease of removal for re-working in the future.

On the exterior facade, a visual connection to the outside has been maintained using controlled apertures crafted in corten steel. The jaali allows minimal daylight to penetrate within and prevent monkeys from entering the premises. However, on the lower floor near the entrance, split-face granite stones have been used for their ease of maintenance and rigidity. To achieve functional efficiency and ease of maintenance, the services have been planned on the outside.

The building is a reflection of the current time and creates a strong impression with the onlooker. It has been designed as a protective armour offering very little views of the outside, keeping the hostile and acrid environment away. By doing so, it puts forth a pressing question “have we brought ourselves to this? And, even if we have, can we still make it interesting?” Instead of hiding under a veil of glass and granite, the design aims to make a post-industrial statement that would intrigue the visitor. With carefully engineered design interventions, a new life has been leased to the structure and made it pertinent for years to come. 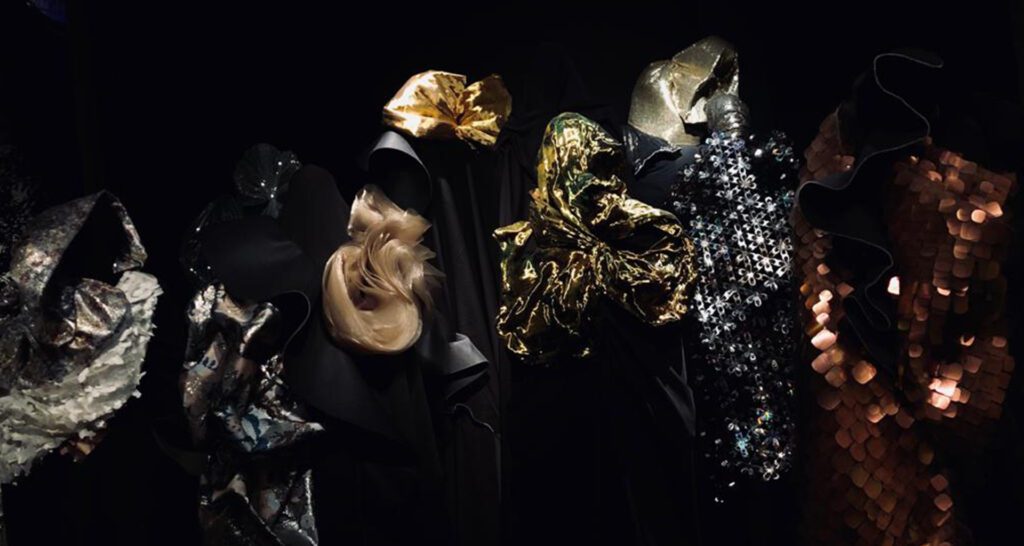 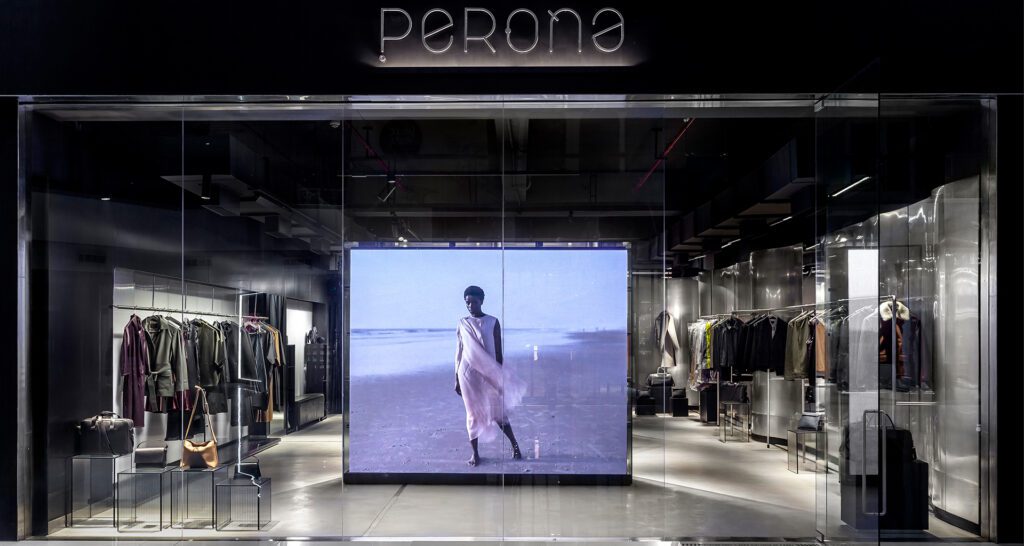