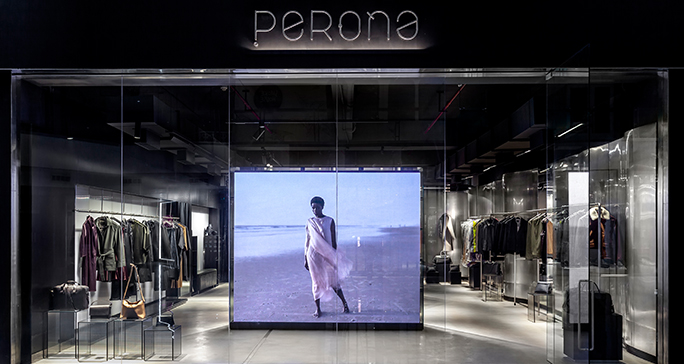 Within the retail landscape of a mall in New Delhi, the design for Perona’s new store is an attempt to usher in retail and outreach in the post-pandemic world. The design explores the convergence of two value systems often considered at different ends of the spectrum—culture and shopping. The aim was to create a distinctive and edgy space for the brand by not simply displaying clothes but as a pop-up to catalyse
the transformation of retail and fashion into an immersive experience, as demonstrated by the large LED screen at the entrance. Undulating stainless steel walls, polycarbonate sheets, and glass are the materials used to express this intent.

Aces of Space - Retail Designer of the Year

Sitting within the retail landscape of a mall in Saket, New Delhi, the design for Perona’s new store
is an attempt to usher in retail and outreach in the post-pandemic world. The project explores what might be gained from the convergence of two value systems that are often considered at different ends of the spectrum—culture and shopping. The aim was to create a distinctive and edgy space for the Perona brand. In doing so, the store doesn’t simply display clothes but is a pop-up aimed at catalysing the transformation of retail and fashion into an immersive experience.

The design is derived from exhibition spaces, which display a thought, not a product. It builds on
the concepts of modularity, flexibility and reusability of space while experimenting with the dynamics of modern consumption, both digitally and physically. The store is, therefore, conceptualised as a non
-intrusive shell with impactful gestures and fronted by a large LED screen that animates the zone between the walkway and the store’s interior.

The design takes an a-contextual approach by generating experiences that make a cultural statement instead of retail. Within a small space, a variety of experiences are brought to life through a controlled palette of changing materials, lighting and finishes–setting the stage for an immersive retail experience. As a studio, we are interested in finding areas of work that slip between conventional territories and this project offered us certain freedom to explore that. We wanted to create a shop display system that was ephemeral. The modular elements that populate the center of the space are meant to be reconfigured periodically, thereby allowing the viewer a fresh experience each time they visit. The LED screen is slightly inset to generate a sense of intrigue and interest for casual observers passing by on the street. As one moves into the store, a series of Perona’s updated classics are displayed as objects in an exhibition, seeking to disconnect the store from the temporal dimensions of fast fashion.

The idea for the changing rooms as akin to the green rooms in theatre, takes cues from Shakespeare’s famous quote: “All the world’s a stage, and all the men and women merely players”. Forming a basis for the cultural experiences, these rooms allow one to transition into a new version of themselves. They are enclosed using draped suede fabric along with wooden panels, thereby expressing a sense of urgency mixed with comfort that one experiences through this transition.

The overall palette is mute—neutral and industrial in character with sharp, bold and strong details. All materials are presented in their natural state––cold, and distinctly different from the objects on exhibit. Reusable polycarbonate and curved stainless steel panels on the walls create a foreground of dense, black and grey material with counterpoints in glass. Their imposing character is balanced by suede curtains that adds textural variability and breaks down the monotony of the black to create highlights in the space. The metal doesn’t just enhance the starkness of the bare space but diffuses and reflects the colour of the merchandise suspended immediately in front of it. It animates shadow and reflects the temperature of the store as a whole, thus creating an immersive experience. 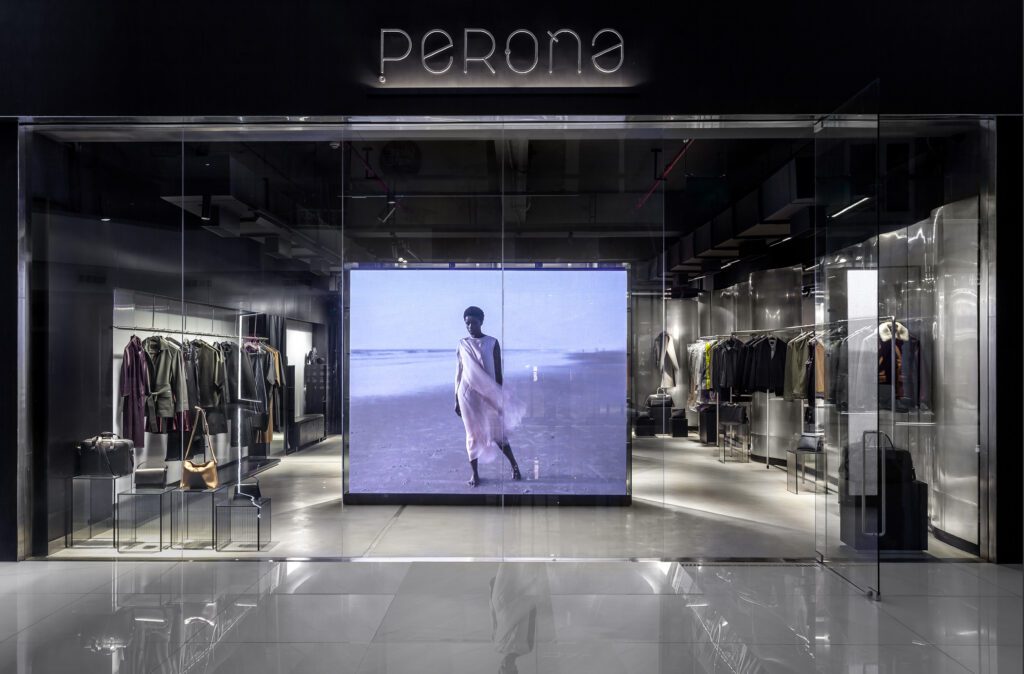 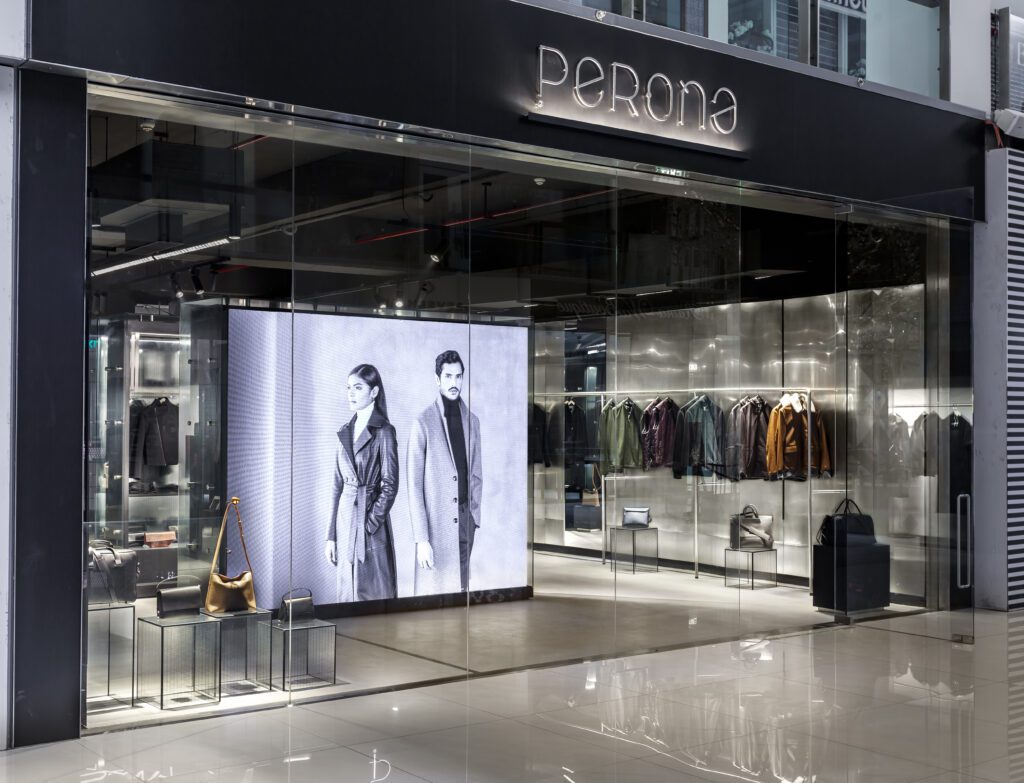 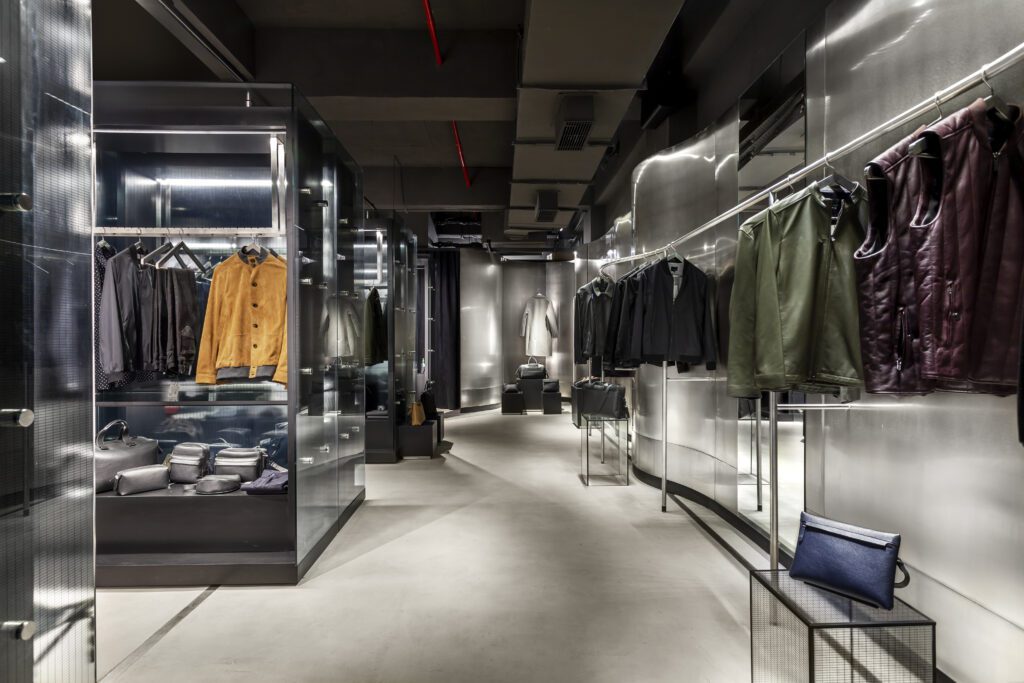 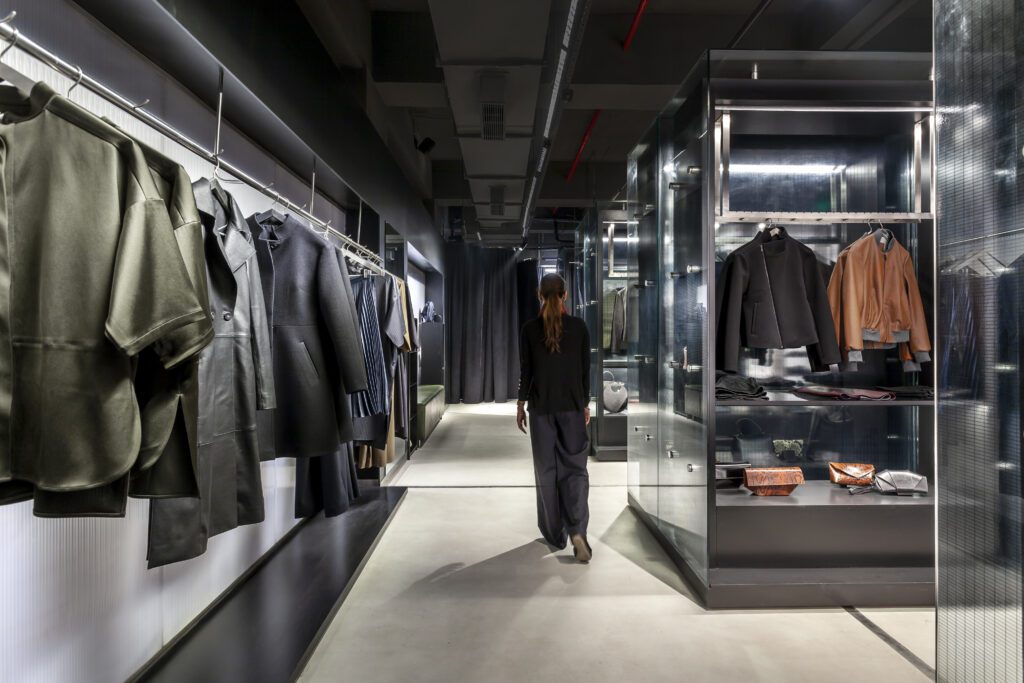 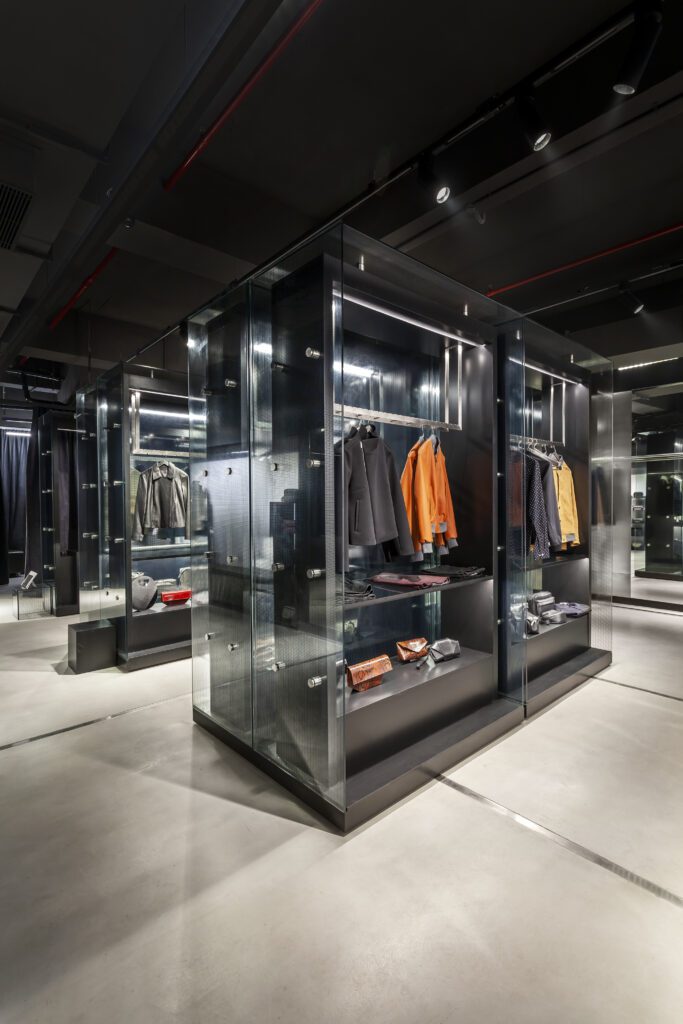 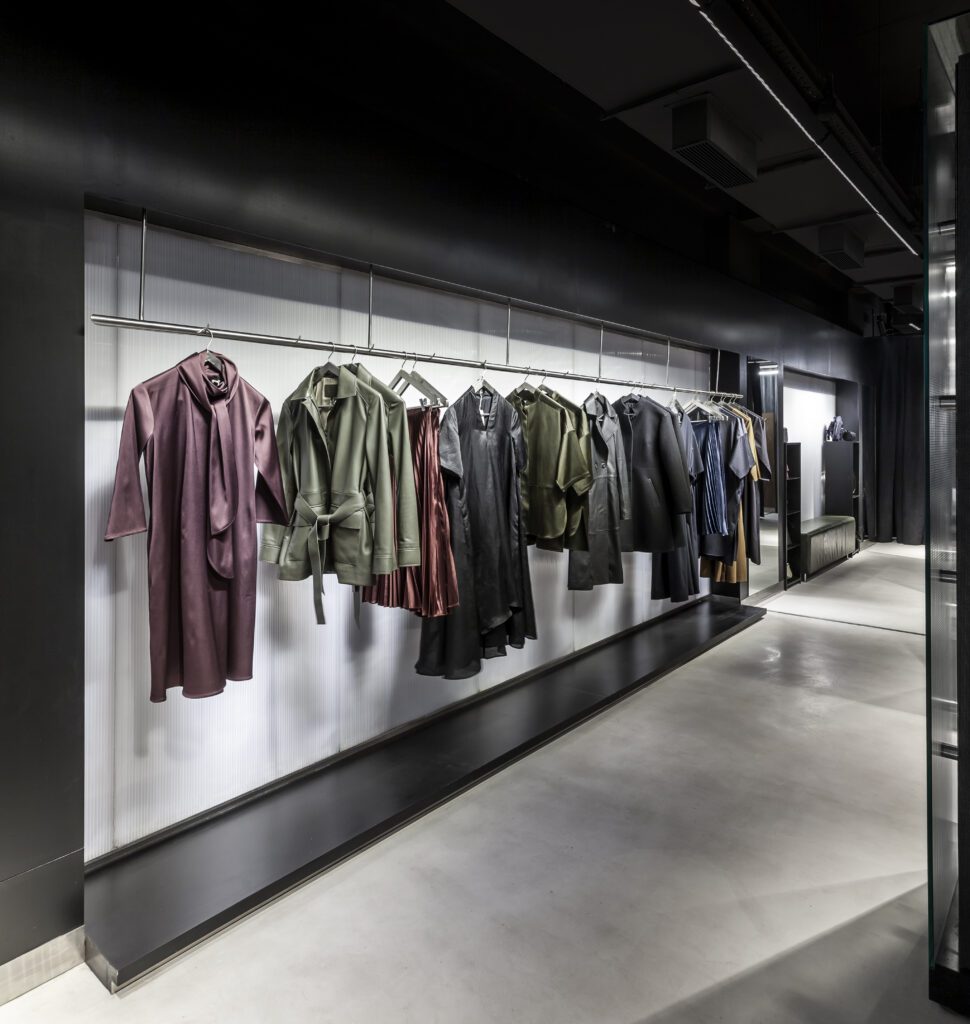 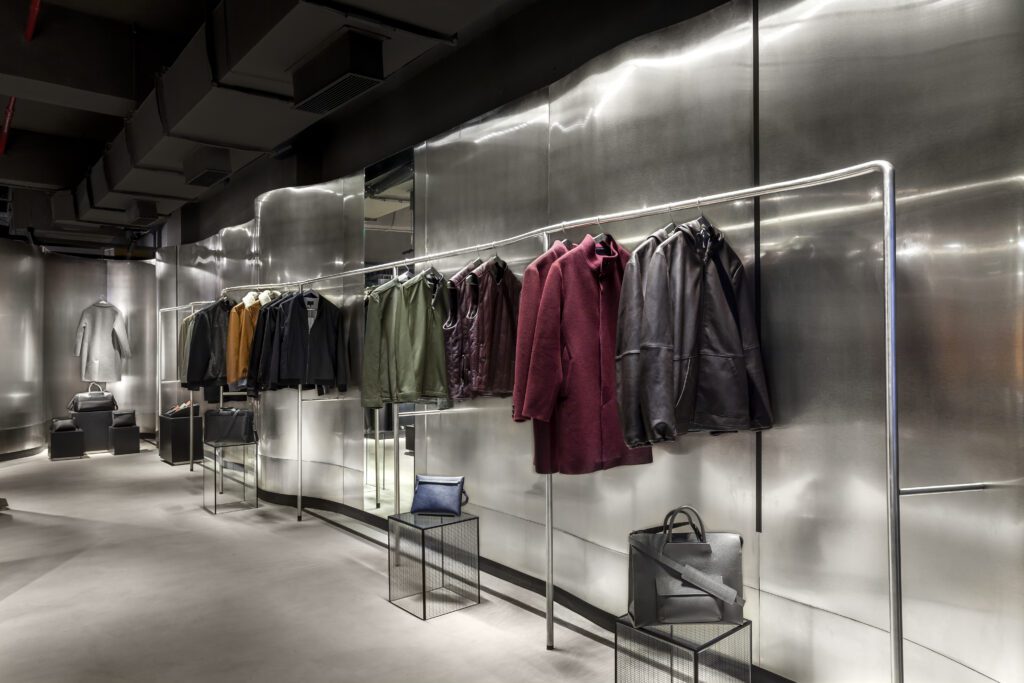 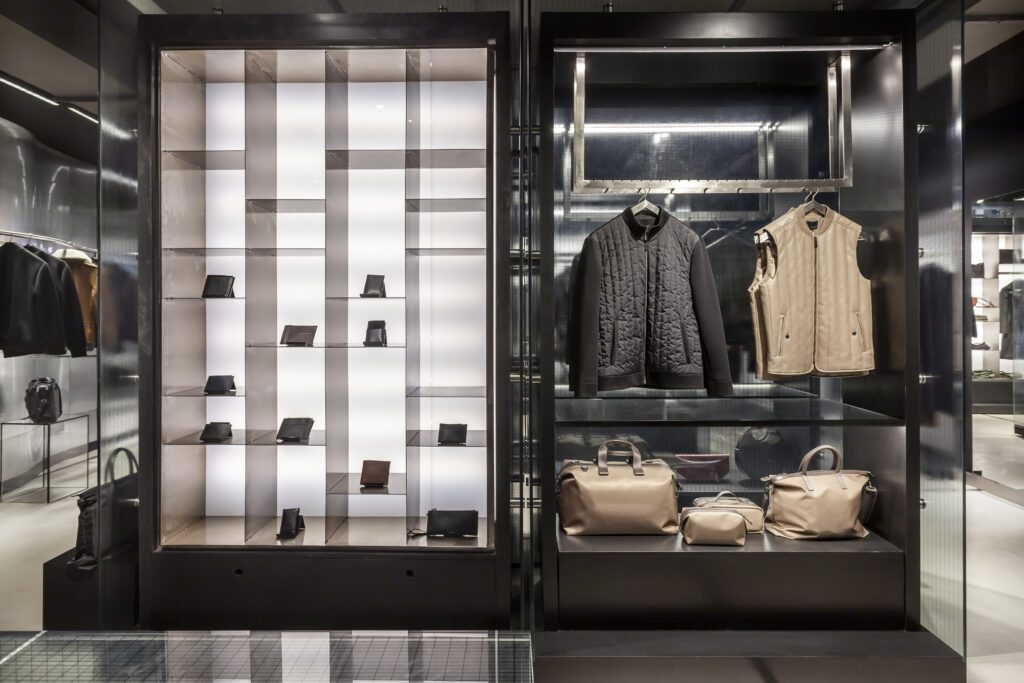 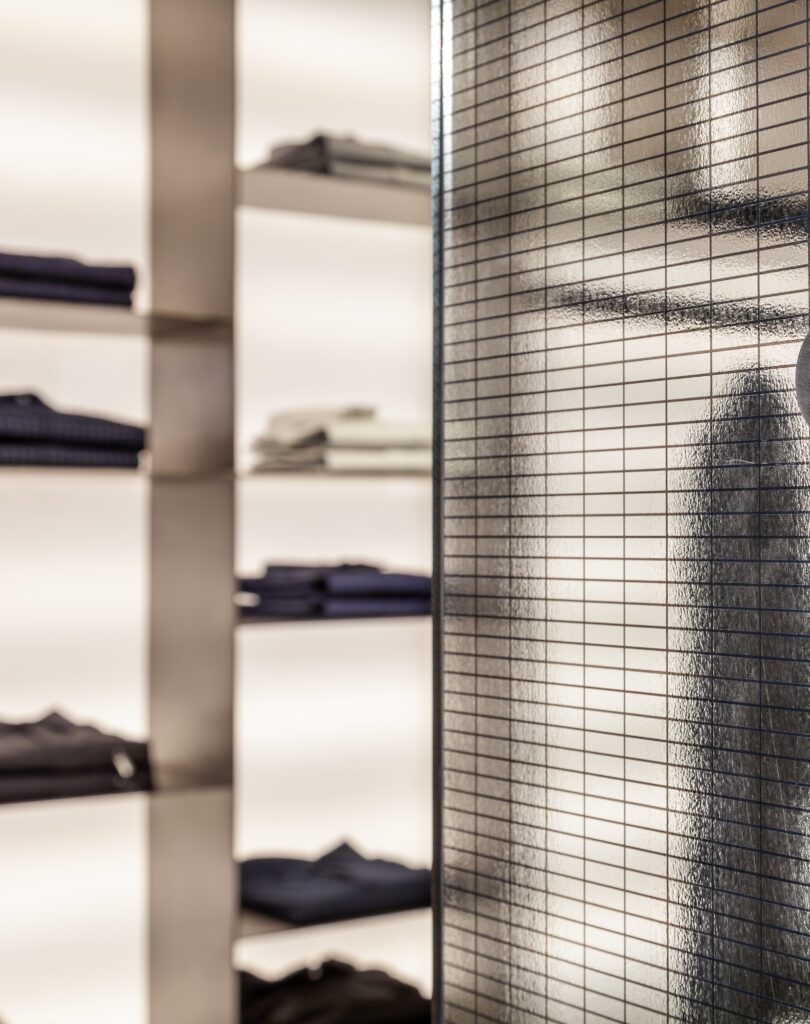 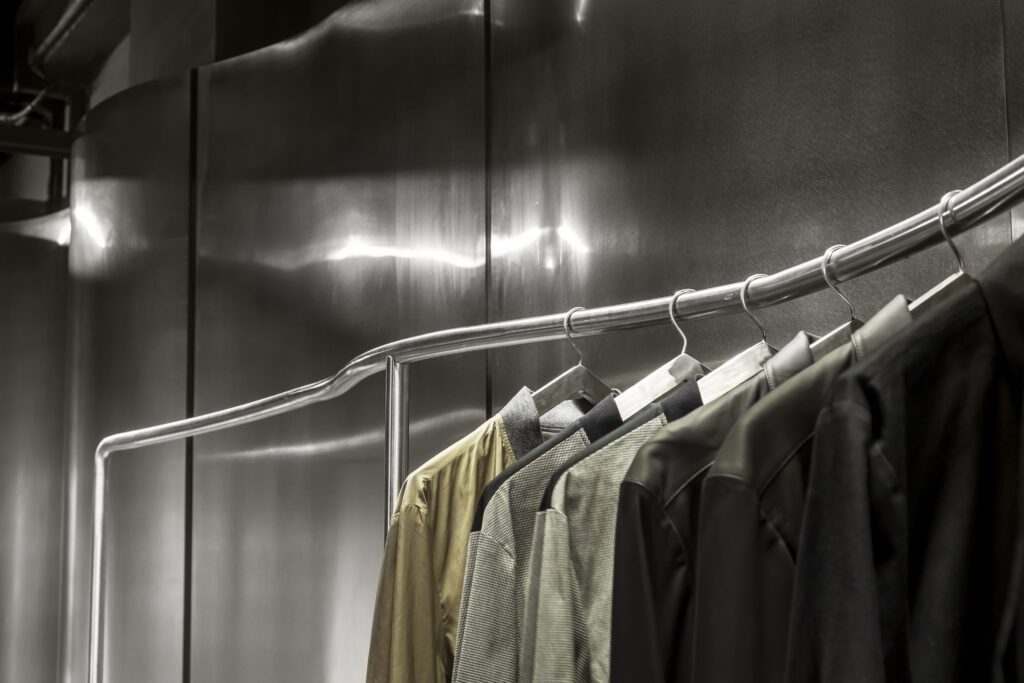 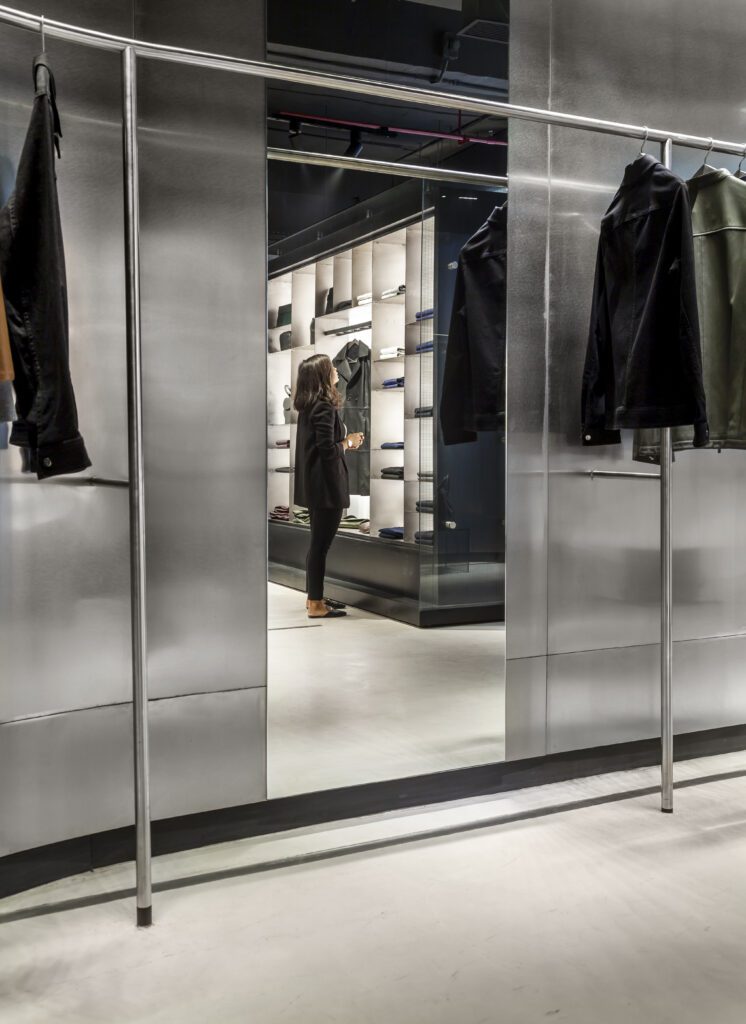 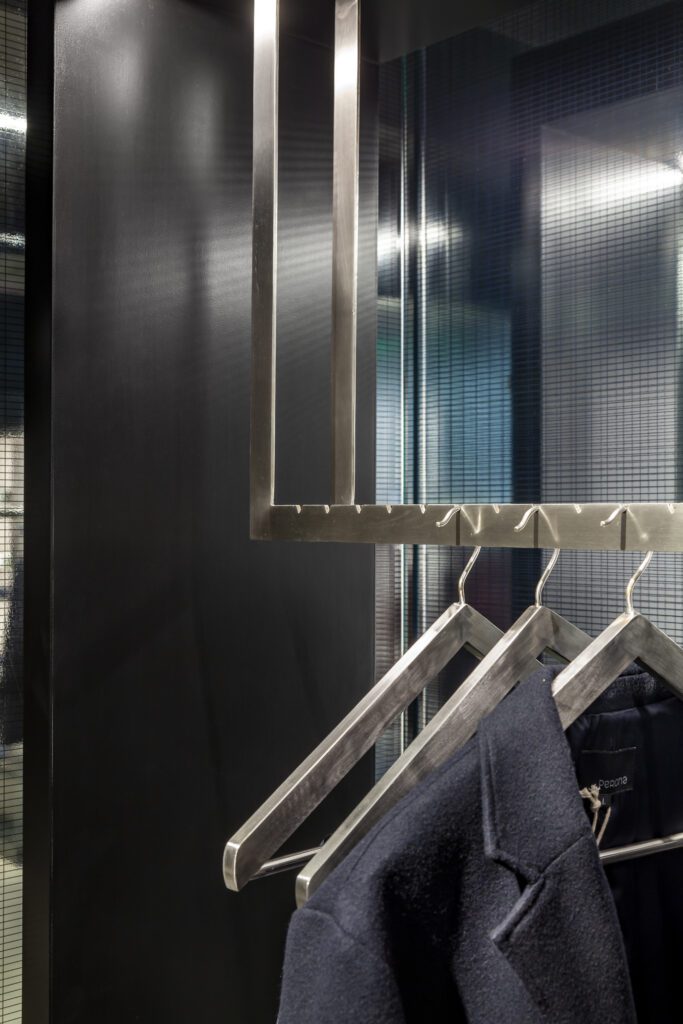 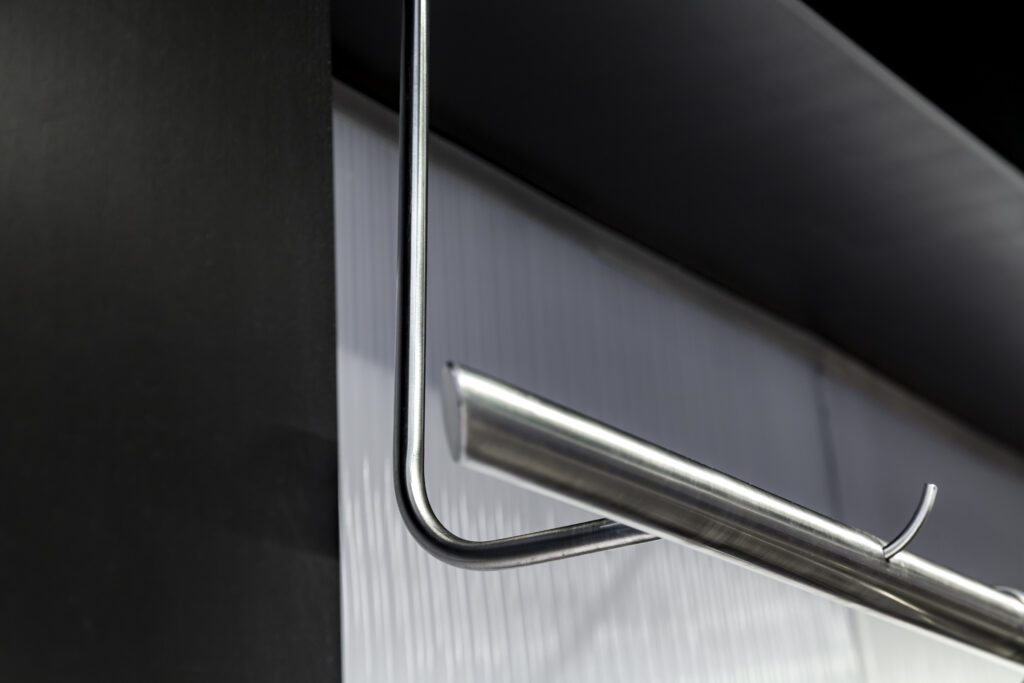 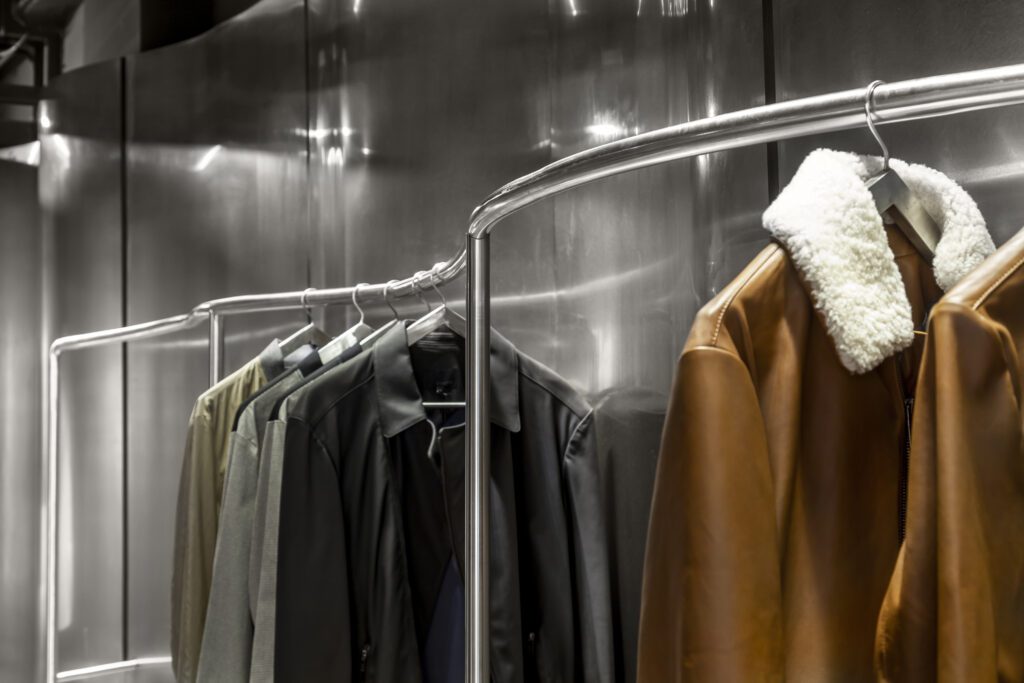 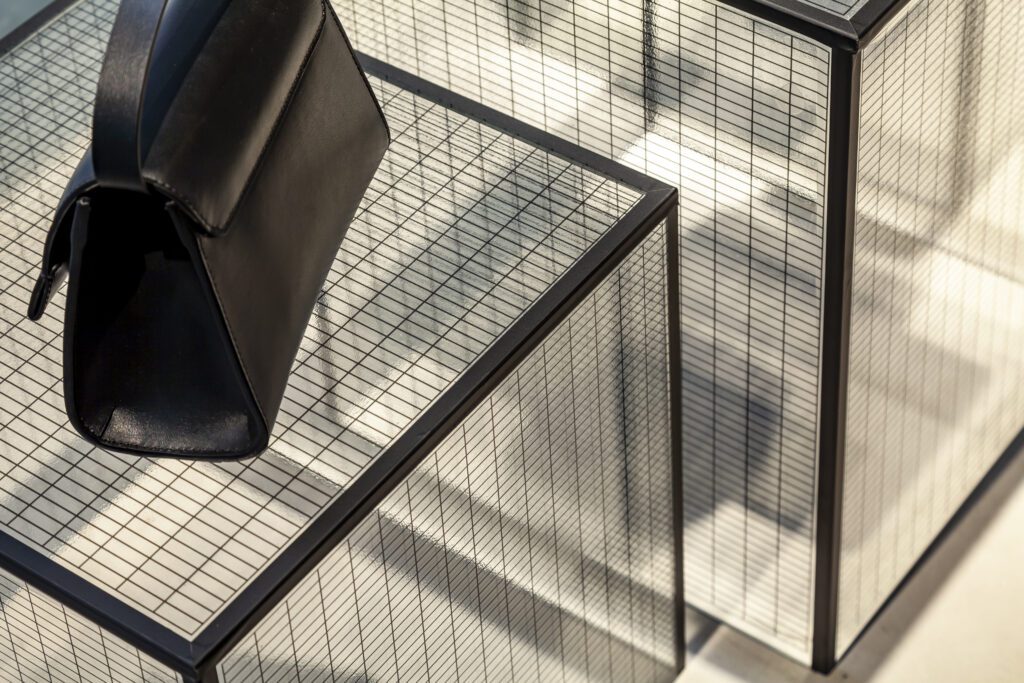 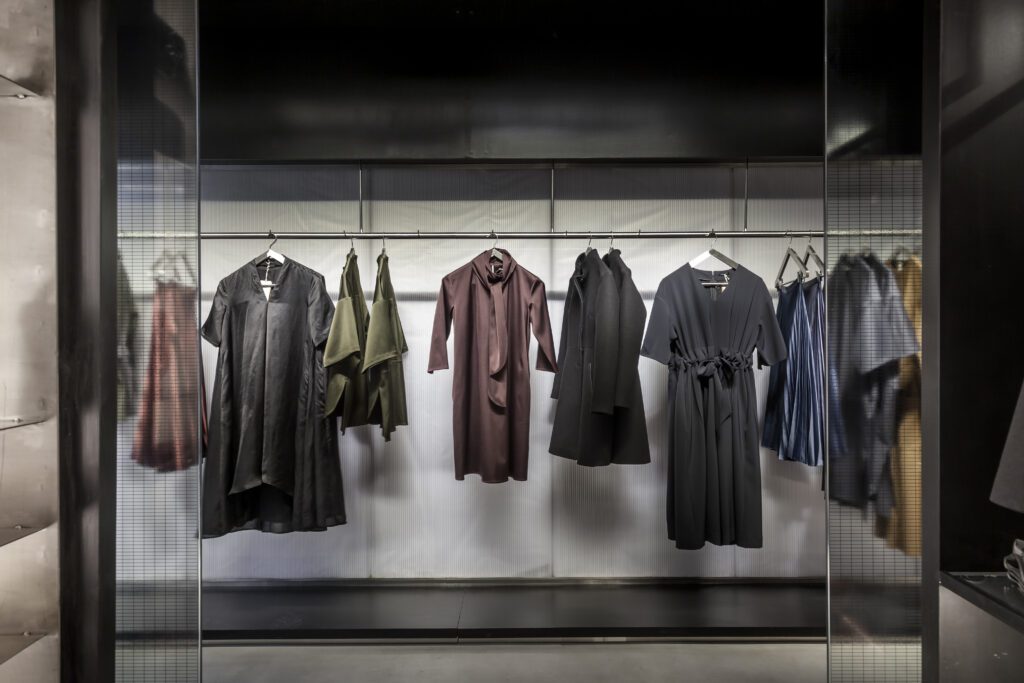 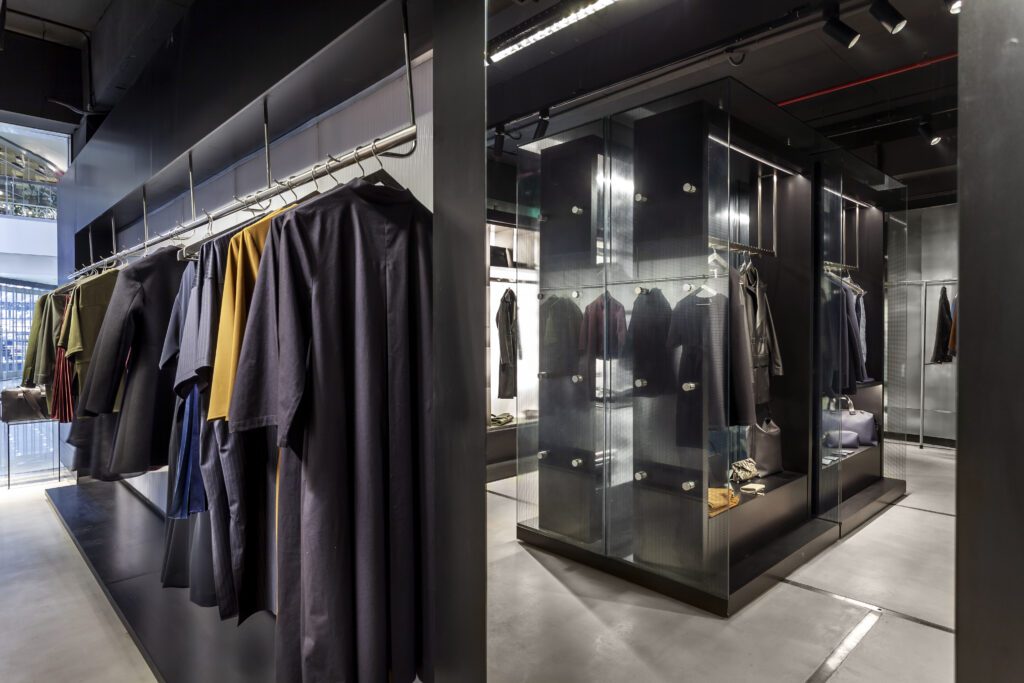 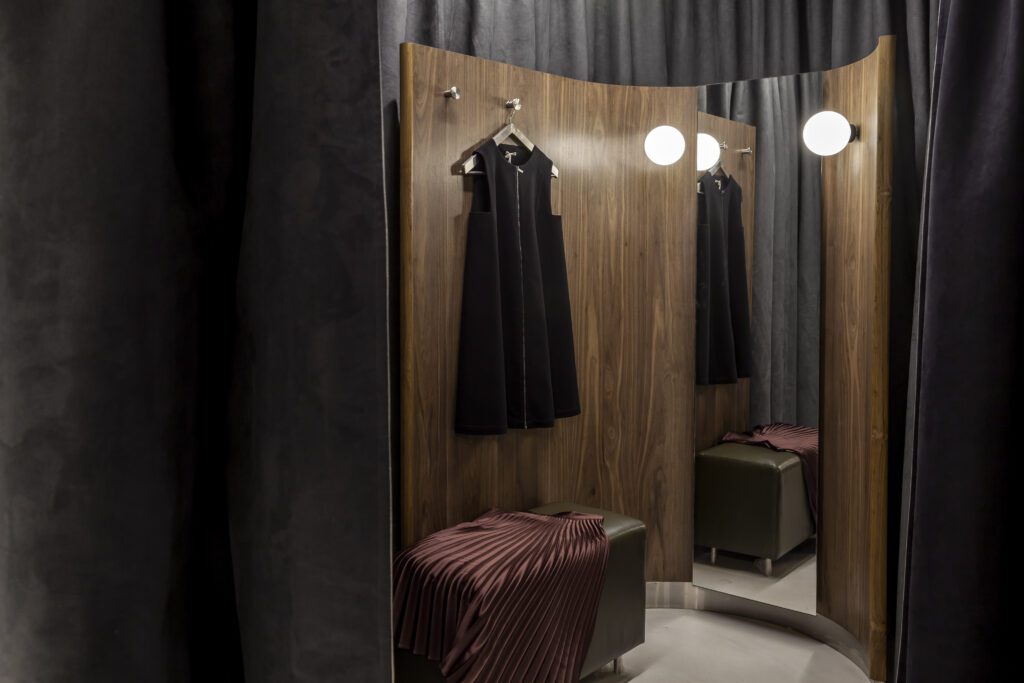 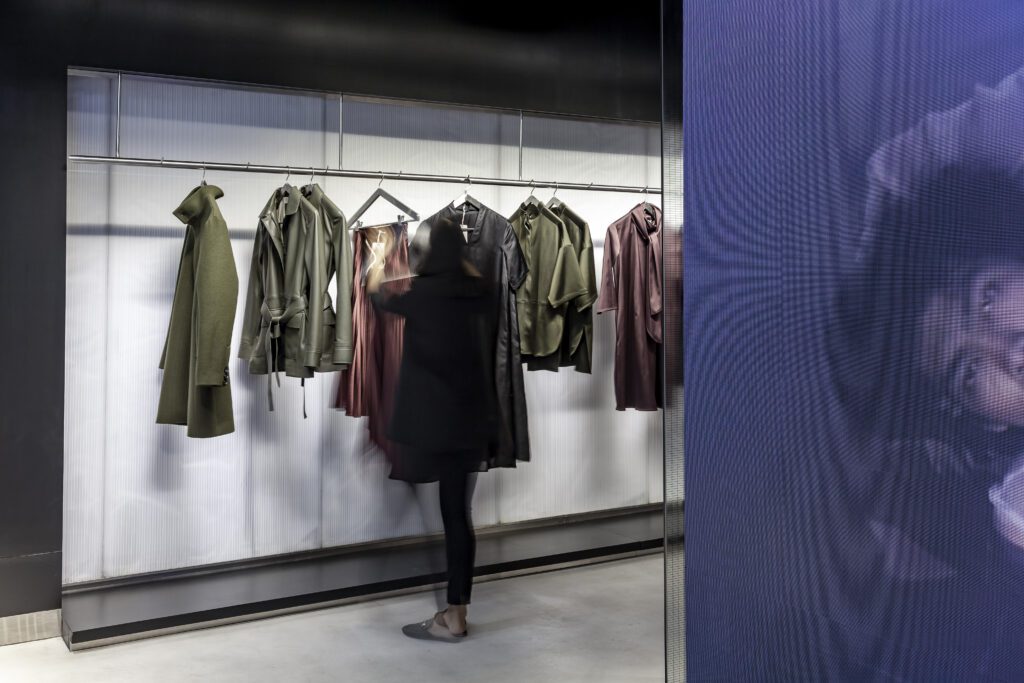 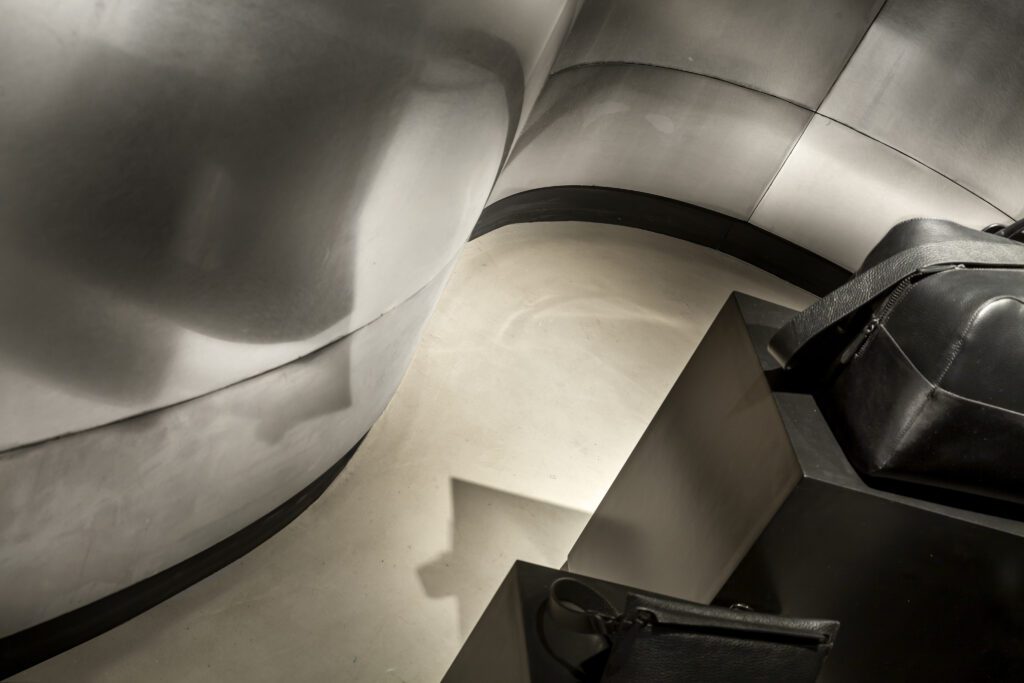 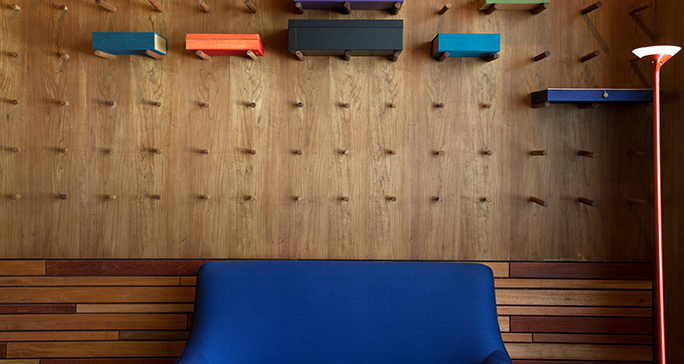 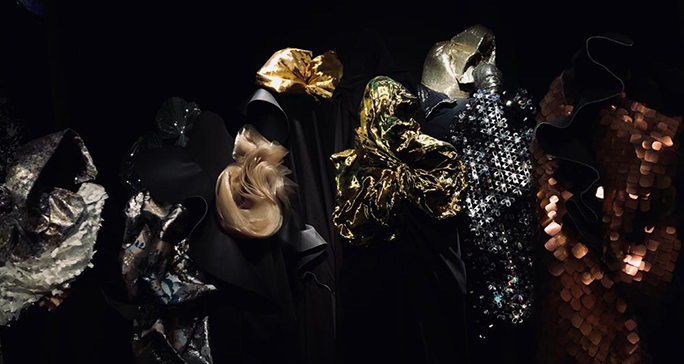 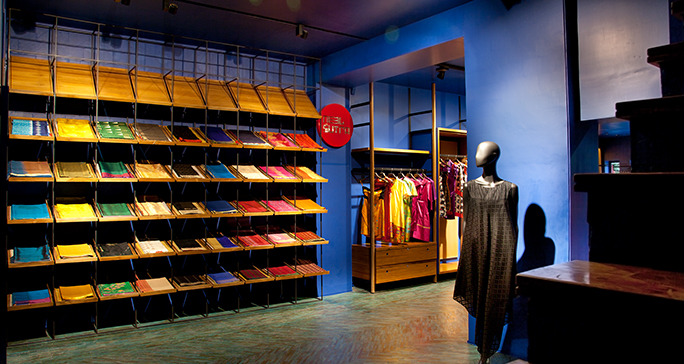 A Tribute to the Ethos of Indian Design
Retail, Neelsutra | New Delhi